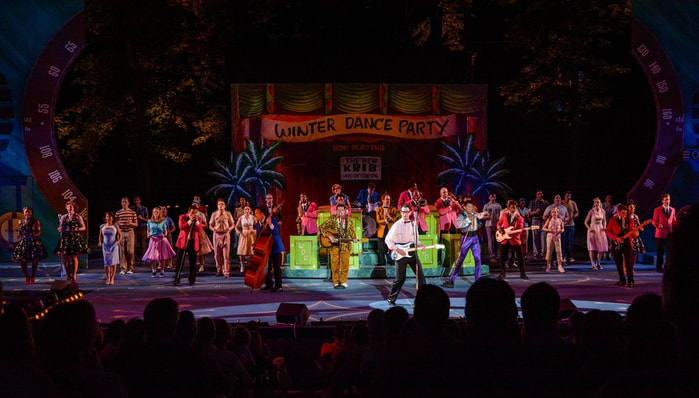 "Andy is a fearless performer and a delicately nuanced actor."
Marcia Milgrom-Dodge, Tony®-Nominated Director
"Christopher had the crowd on its feet"
Chicago Tribune. Chris Jones
"He steals your heart with his voice..."
Broadway in Chicago

"Not only does he inhabit the songs with panache, but he also proves himself a talented guitarist. And while he has the charisma needed for the big numbers, he is also capable of stillness and a luminous interiority in the quiet moments. Indeed, he shines in the ballads..."
BroadwayWorld.com. Carla Maria Verdino-Süllwold

"His guitar work is strong as is his stage presence."
Lancaster Online. Jane Holahan
"Andy Christopher has a lyrical, gentle presence that becomes electrifying
when he starts to rock... Christopher is in love with the songs, which he delivers in a beautiful tenor,
paying tribute to Holly without brute impersonation.
His dance background is evident in subtle movements at the
microphone and smashing rock-star leaps and kicks."
Portland Press Herald. Jennifer Brewer